Short description of main characters of “The Doggy Crime” series.

Tenants of No 113 tenement house: 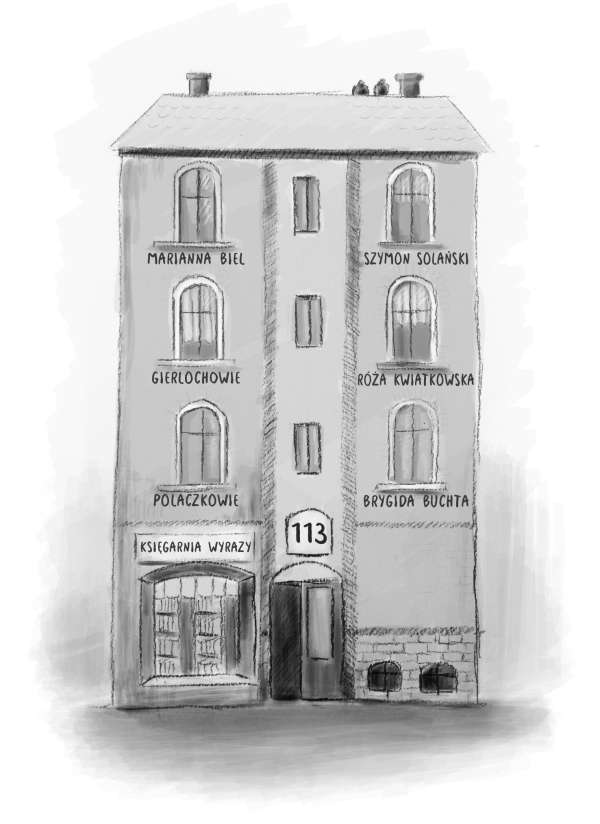 Szymon Solanski – (flat no. 6) private eye, former police officer. Lonely and antisocial. He doesn’t expect a lot from his life, since he’s lost his wife. His life is going to change when he meets Gucio, an old mongrel without one leg.

Gucio – (flat no. 6) mongrel who was saved from the shelter in Chorzów by Szymon Solanski. Gucio is greatful for giving him a real home but he still gives his (often ironic) opinions on everything. He helps Szymon in his detective work.

Roza Kwiatkowska – (flat no. 4) she’s obese and ribald and she likes to drink a lot. She’s a journalist and she secretly loves her friend, Szymon Solański. She’s loyal and honest and she has a good heart.

Anna, Tadeusz and Ewa Polaczek – (flat no. 1) Anna is a bookseller, Tadeusz is a teacher and their daughter Ewa is a rebellious teenager.

Brygida Buchta – (flat no. 2) she’s a true born Silesian. She spends most of her time with her pinscher monitoring the street from her kitchen window.

Adam and Hubert Gierloch – (flat no.3) twins who could not be more different. Adam, friendly and helpful, is a dancer. Hubert after years of emigration comes back home only to divest his brother’s flat.

Sergeant Baranski – policeman from Chorzów. Szymon Solański has to fight with him all the time. He’s not very bright, but arrogant and malicious.

Sergeant Natalia Kamienska – female officer from Chorzów. She had an affair with Szymon Solański.

Sergeant Liam Murphy – an officer of the Garda Siochana (the police force of the Republic of Ireland). He was a boyfriend of Roza Kwiatkowska in “Murder over the cliff”.

Doctor Chisel – talkative veterinarian from Doggy’s Bone clinic. Gucio visits him from time to time (against his will).

Attorney Potomek-Chojarska – beautiful and selfish lawyer. She gets in touch with Solański from time to time, tempting detective.

Czeslaw Koszycki – former soldier, he hired Szymon Solanski for his missing granddaughter case in “Murder over the cliff”.